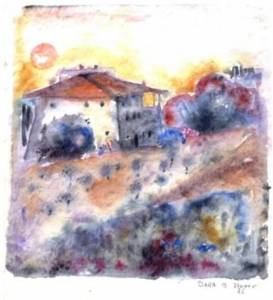 The building in which the Foundation is based is located in a hilly area about a kilometer from the town of San Vincenzo a Torri, in the municipality of Scandicci, about 20 minutes south- east of Florence. It has a rectangular plan and develops around a central body that was once presumably a watchtower.
The central tower dates back to prior to the construction of the remaining parts of the building and features a typical 14th century architectural style. There vox populi he attributes this part of the building to the leader Castruccio Castracani who, according to legend, buried his treasure there. The tower was however part of a sighting, communication and transmission system of visual messages that made the Val di Pesa an important strategic and military outpost.

It is difficult to go back to certain documentation for the periods prior to 1480, since the first registers of the Republican Cadastre date back to 1427 and in any case, as flooded, some tithing records necessary to go back to the oldest changes of ownership are missing. From numerous architectural elements it is possible to deduce that the structure from which the tower is surrounded must have been built between the 14th and 15th centuries, to be used as a small convent.

On the cards of the Capitani di Parte – maps of peoples and roads (tome 117, part 1a) – dating back to 1580, the building of Vico is marked, in which he resided, tenant of the noble Florentine merchant family of the Busini, certainly Pietro Barucci, as indicated precisely in these ancient maps. According to the arroti and the samples of Decima Granducali (until 1527) and Republicans (1480 ca.), the Busini family owned the property and its annexes at least since the second half of the fifteenth century. The previous owners of the Businis must have had some connection with the Medici family, given the large fireplace with the Medici coat of arms in the main room of the “Villa di Vico” [1].

The noble Florentine family of the da Cepperelli became the owner of the Villa di Vico in 1601 and remained there until 1644. The property of the da Cepperelli family is also shown in an ancient watercolor (dating from around 1640), which depicts the most important buildings in the area (ASF, Carte Galli Tassi, recently published in AA.VV., Il Mulinaccio, Ed. CentroLibro, Scandicci, 1996). For a certain period the da Cepperelli leased the “Palazzo di Vico” to “Pier Antonio de ‘Pazzi, with all his belongings” (cf. in ASF, Modern Notary Prot. 17439- 17473 Year 1677 – Notary Vergelli). Only around 1640 did some members of the da Cepperelli family move to the Villa di Vico.
In 1644, following a divergence with the property of the Lami, bordering to the north, (divergence also documented in AA.VV., Il Mulinaccio, op. Cit., Pp. 21- 26 and pp. 48-49, and attributable to a diatribe on the attribution of some rights to exploit an impressive production infrastructure consisting of an artificial lake that fed two mills, a few hundred meters away from the Villa di Vico) and on the consequent suggestion of the Grand Duke of Tuscany himself (involved in the dispute), Giannozzo di Giulio di Francesco da Cepperelli sells “The Villa and Palazzo di Vico”, with all its appurtenances, to Captain Carlo di Lorenzo d’Agnolo Galli, his antagonist.

As can be deduced from a testamentary bequest of 1677 (see notary Vergelli in the aforementioned will), in addition to the Villa di Vico, the Galli family had purchased several properties in the area. This purchase was also reached following an important marriage of the progenitor of the Gauls, Agnolo di Lorenzo d’Agnolo Galli, a rich Florentine merchant and nobleman, who had married a Tassi at the beginning of the 1600s and had had the great Villa as a dowry. dei Lami, not far from the Villa di Vico. After having rearranged the Villa dei Lami, enlarging and renovating it, this ancestor of the Gauls had decided to expand his possessions in the area, buying houses, land and production infrastructures from neighboring owners.

So he had also bought the Palazzo di Vico with its annexes, as indicated also by the arroto n. 68 of 1644 in the Decima Granducale of the District of Santa Maria Novella, n. 2789 (in ASF). As can be seen from the various grand-ducal tithes, by decision of the new owner, the two mills (now known as the Mulinaccio) ended up depending on the Villa di Vico and for a few generations remained merged with the appurtenances of the Villa di Vico. 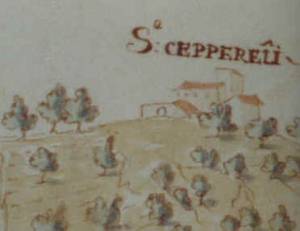 From father to son, the Gauls pass on the ownership of the Villa di Vico: Giovan Matteo (son of Captain Carlo di Lorenzo d’Agnolo Galli) inherits “The Villa and the Palazzo named Vico” following the division of the inheritance made with the brother Lorenzo Galli, May 4, 1677 (Cf. ASF, arroto n. 59 of the year 1678, Decima Granducale Leon Rosso, QSMN, n. 2827). Giovan Matteo leaves the property to his sons Isidoro and Domenico (See ASF, Decima Granducale n. 2835, roll of year 1686, n. 11). From the Champions of Decima Granducale (year 1714, n. 3621, in the Leon Rosso banner of the Santa Maria Novella district – Gonfalone belonging to the Galli family – on paper 341), it is assumed that the Villa di Vico passed to Domenico di Giovan Matteo of Captain Carlo Galli. On his death in July 1756, Domenico left the Villa di Vico as an inheritance to his three sons, Matteo, Luigi and Giuseppe (See ASF, arroto no. 94 of the year 1756).

From the Decima Granducale n. 5737 of the year 1776, arroto n.258, it is noted that in that period one of the three brothers, Matteo Galli, was co-owner for a third of the property named Villa di Vico and that, not having to pay any tithe, he resided there. From the tithe registrations of the Lorraine Cadastre (Cfr. ASF, decima n. 491, arroti of the year 1790, n. 14, 17 and 18) we obtain the status of the property in the year 1790 and it is assumed that the three heirs of the Galli, namely Matteo, Luigi and Giuseppe, were still co-owners of the property. From the last tithes of the Lorraine Cadastre (which covers the period 1776- 1834) it is assumed that the property has definitively passed to Matteo Galli. The subsequent Indicative Tables of the Tuscan General Cadastre (TI 2 Section H, of Scandicci ex Casellina and Torri) also refer to the Galli family.Rates, as well as the cadastral maps of 1820, in which the property and its annexes result in parcels 842 (Villa and farmyard), 841 (working, poplar, olive and vineyard) and 843 (working). Only at the beginning of the century, after almost three centuries, the Gauls Tassi sells the ownership of the Villa di Vico.

At the end of the Second World War (in the period in which the front was located in the Val di Pesa area), the building, given its proportions and its considerable robustness, was used as a military hospital for the German troops, while the tower was used as a lookout point, towards Cerbaia (area of operation of the Allied troops). For this dual function, the Villa was heavily bombed (the tower suffered the greatest damage, being beheaded several meters). After the war the Villa remained in a semi- abandonment, until the end of the 60s, when the current property worked on a careful restoration, which was able to restore the ancient sixteenth-century structure of the building.

Description of the building
From the outside the building has a robust conformation, like formwork; on the North corner-To the east there is a large loggia with stone columns, already described in an 18th century customs record (Cfr. ASF, Cadastre Lorenese n. 491, arroti anno 1790, n. 14, 17, 18). Inside the rooms worthy of note are the central hall on the ground floor with a large Medici fireplace (with coat of arms in the center) in pietra serena placed on the north side of the room. Continuing on the right you enter a cross vaulted room – we are in the oldest part of the building, namely the tower – which on the left side has an ancient stoup in pietra serena, probably from the period in which the building was used as a small country convent. In the opposite room you can see what was the original entrance to the tower (located to the north, towards the village of S. Michele a Torri, on which the sighting system of the area originally depended): it is a façade in drafts square of pietra serena, with a large arched stone door, made in the second half of 1200 (on the upper floor, in correspondence with this door there is a large arched window in pietra serena). All the rooms on the ground floor have wooden beamed ceilings. Upstairs, in the central body of the building, you enter a room with wooden ceilings and a large stone fireplace. Under the entire surface of the building there are vaulted cellars of which the oldest is the one on which the tower stands.